A friendly group of Cherry Lodge members and volunteers enjoyed a most interesting walk around Soho on Friday 19th June 2015. The walk was led by Michael King, a volunteer befriender at Cherry Lodge who is also an experienced professional tour guide. Many thanks to Michael for sharing his knowledge and for giving his time free of charge two or three times a year to lead Cherry Lodge walkers around the sights of London. The following account was kindly provided by Annabel Ripin.

A perfect afternoon in Soho

Well, what a wonderful day we had! Unlike most people, this was my first time on one of Michael’s informative walks. Thirteen of us met him at Tottenham Court Road and my goodness what a lot of interesting things we learned over the next few hours, plus bits of gossip on the rich and famous. Soho is infamous for its associations with striptease and sleaze and has also always been associated with a wide variety of residents and visitors from the worlds of literature, art, radical politics and show business.

We saw the home of Groucho Marx, now the Groucho Club, in Dean Street, the building in Frith Street where John Logie Baird lived and first demonstrated television in 1926, and the house in Beak Street where Venetian painter Canaletto lived for 10 years. After walking around Wardour Street, Dean Street and Greek Street, we went into Soho Square. There we saw the site of where Casanova lived, which is now a church, and learned that late in life he worked as a librarian, which seems a bit incongruous after all his philandering. In the corner of the square is the French Protestant church, a haven for French Huguenots, and in the middle of the square a statue of Charles II. In Greek Street we saw the famous Coach and Horses pub, where the ‘professional’ alcoholic Jeffrey Bernard drank, and, on the opposite corner, Kettner’s, which was a favourite haunt of Oscar Wilde – possibly due to the attraction of there being bedrooms upstairs – and also a place where Edward VII could meet Lily Langtry in private.

As the afternoon went on we saw many more blue plaques and Michael regaled us with the background of each famous person and lots of anecdotes about their past. Although we had a coffee on the hoof we were certainly in need of sustenance at the end of the walk some two and a half hours after we began.

Luckily for us Yvonne Shield, Cherry Lodge’s Volunteer Coordinator, had arranged a wonderful complimentary tea for us through her many contacts. We arrived at the Grange White Hall Hotel on Montague Street, next to the British Museum, and were ushered into our very own private courtyard with tables awaiting us with crisp white table linen and china all laid out. It was a lovely area – absolutely delightful. The weather was fine and we settled down to the most wonderful tea in a charming atmosphere. A perfect end to a perfect day. 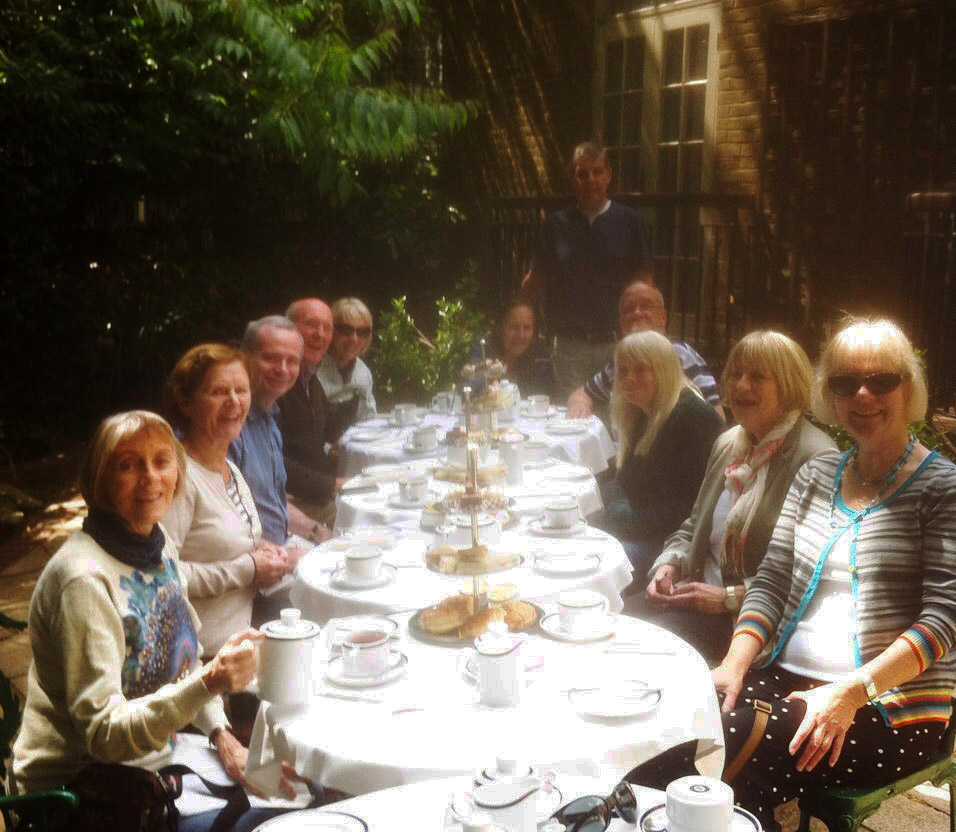