On Saturday 5th November 2016, a group of Cherry Lodge members and volunteers enjoyed a most interesting guided walk around Bloomsbury. Thank you once again to Michael King, a CL volunteer befriender and experienced London tour guide, for providing his professional services free of charge. Thank you also to Yvonne, for organising the outing, and Sarah Emich, general manager of the Grange Blooms Hotel for arranging a delicious tea at a greatly reduced price. Thank you also to Peter Hague for providing a very detailed account of the event, which is included below. Apologies from the website editor, who is just back from holiday, for the late posting of this item.

An Adventure in Bloomsbury

‘It was a cold but bright day as we met outside Russell Square tube station for another adventure with the ever informative and entertaining Michael King. Our walk would be in the Bloomsbury area of Marchmont Street and Doughty Street, where an incredible number of famous folk are suitably commemorated by blue plaques. Many of these plaques were provided by the Marchmont Association, who have done commendable work to preserve the history of the area.

Much of this area was severely damaged in the wartime Blitz but some splendid Georgian properties remain. Marchmont Street itself has been largely rebuilt and is now dominated by the rather magnificent Brunswick Centre, with tasteful flats overlooking a terrace of restaurants, bars and small shops.

Among the literary characters re-created for us by Michael were Charles Kingsley of ‘Water Babies’ fame, whose brother Henry lived at 26 Bernard Street, and James Barrie, creator of ‘Peter Pan’, who donated the royalties from his work to Great Ormond Street Hospital. There is now a block of flats on the site of Barrie’s home and an International Hall of Residence for Students has replaced the home of Peter Mark Roget, author of ‘Roget’s Thesaurus’. Another interesting blue plaque featured George Orwell and Sir Stephen Spender, on the site of the offices of ‘Horizon Magazine’, where Orwell worked and apparently often slept during the Blitz. Number 48 Doughty Street, now home to the Dickens Museum, is where Charles Dickens wrote his first novel, ‘Pickwick Papers’, and others including ‘Oliver Twist’.

Michael also told us about a number of ‘good eggs’ who lived in the area. Probably the most distinguished of these was Sir Thomas Coram, who set up The Foundling Hospital at Coram Fields in 1739. As we stood admiring the statue of this former ship’s captain, we were able, using Renie’s mobile phone, to listen to ‘his voice’ telling the shocking story of how thousands of unwanted babies were left in the street to die by the poor in those days. The Foundling Hospital saved the lives of some 27,000 children by allowing mothers to leave their young babies there anonymously, with just a name or memento attached to their clothing. Many of these mementos are preserved at the Foundling Museum. We looked through the gates of Coram Fields, a park and playground where adults are not admitted unless accompanied by a child. This was a poignant moment for Barbara and me, for this was where we used to take our son Robert before he died in Great Ormond Street Hospital soon after his 7th birthday.

Michael also told us about local Church of England vicar and social reformer Sydney Smith (1771-1845), who played a big part in the campaign for Catholic Emancipation and was renowned for his wit and his long and vigorous sermons. Michael read us Smith’s 20 items of ‘Advice on low spirits’. These are just as applicable today, including, ‘To love and to be loved is the greatest happiness of existence’. Other local ‘good eggs’ were Sir Rowland Hill (1795-1879), pioneer of the postal service and founder of the first non-convict settlement in Australia, and John Cartwright (1740-1824), a campaigner for American Independence and for Universal Suffrage (extension of the right to vote).

Back then to Marchmont Street and blue plaques in present-day shop windows, including Kenneth Williams, whose father was the local barber here, and Richard Greene (cue for a rendering of ‘Robin Hood, Robin Hood, riding through the glen …’). Michael then led his band of merrie explorers, along with hotel manager Sarah, to Blooms Hotel across the far side of Russell Square, for a magnificent high tea and birthday cake for Gloria!

What a great day out! Thank you Yvonne, Michael and Sarah. 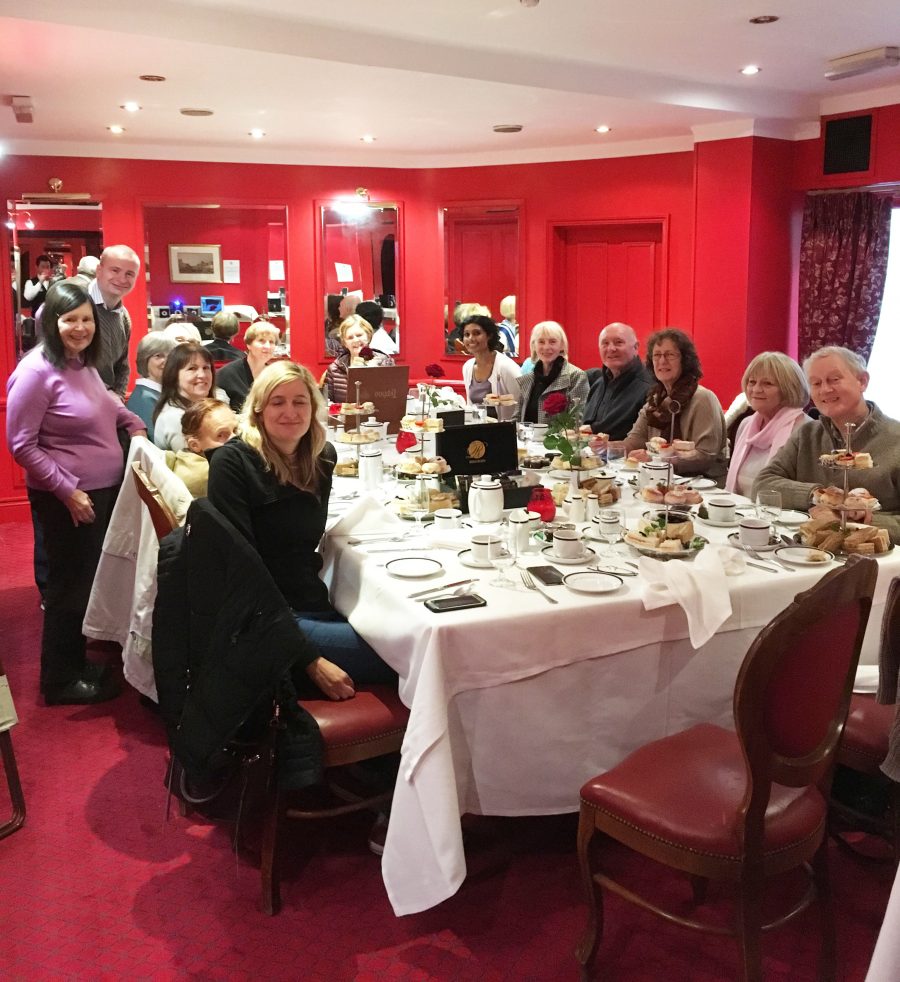