Cherry Lodge Cancer Care held its 2015 Annual General Meeting at Howard House on Tuesday 12th May. The meeting was attended by a cross section of interested parties: members, volunteers, staff, trustees and patrons. Dr Margaret Clark, chairman of the trustees, began with a few words of welcome, which were followed by formal approval of  the minutes of the 2014 AGM.

The Annual Report for the year ended December 2014 was then presented to the audience by Margaret, who picked out a number of points for special mention, including the number of new members (200+ and similar to the previous year), the number of new members with primary brain cancer (6), the success of the Facing the Challenge of Change courses, the setting up of a new Cherry Lodge group for carers, and the ongoing popularity of our Singing Group. A copy of the 2014 Annual Report is available for downloading from the About Us page of this website.

The Annual Accounts were then presented by Cherry Lodge’s auditor, George Georgiou. Following the distribution of copies of the Abbreviated Accounts (Summary Statement of Financial Activities for the year ended 31 December 2014), George explained various key points, notably the fact that the charity had broken even for the year despite decreases in some types of income, including fundraising. Questions from the audience were then taken and answered.

The AGM was followed, as is customary, by the Annual Lecture, which was given this year by Alison Hibberd of Barnet Carers Centre. 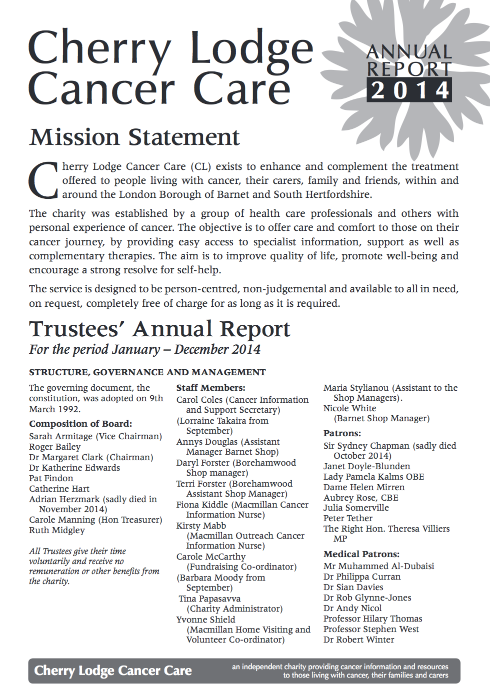